Written by Tom Wright
Updated over a week ago

Any new strategy requires behavioral change. You need your team to embrace and adopt your new strategy in order to achieve business objectives.

In this post, we’re going to be looking at implementing a strategic plan through the lens of the Diffusion of Innovations theory. Specifically, how we can influence certain factors to increase the momentum and likelihood of a new strategy being adopted by an organization, in order to achieve strategic objectives. 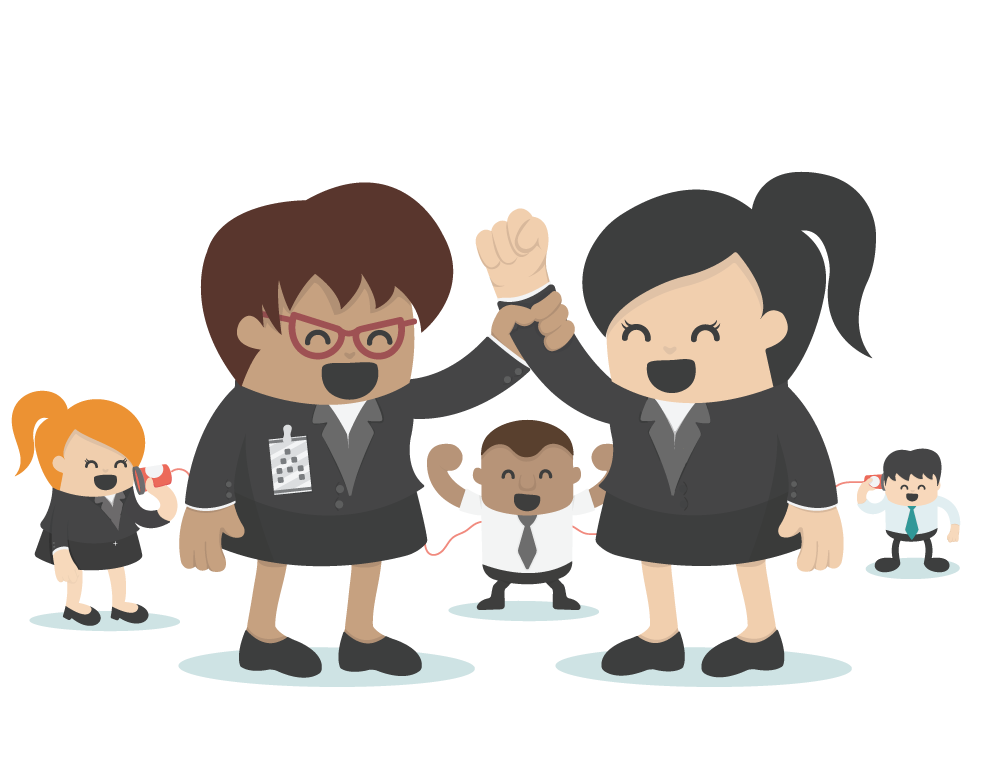 If you're trying to get buy-in for your strategy, either for your team or more broadly in the organization through a strategic change program, then this guide is for you.

What is the Diffusion of Innovations Theory?

Diffusion of Innovations is a very well-known theory which originated to describe how an idea or product gains momentum, and becomes accepted by a specific population or social system over time (if at all). E.M.Rogers constructed the theory back in 1962, however the theory is just as relevant today.

Even if you’re not extremely familiar with the theory, you’ve likely come across or experienced its concept in everyday life (something as trivial as eating 5 veggies a day, or purchasing the new iPhone). These are both examples of an innovation (idea or product) that has gained momentum over time and diffused through a specific population to ultimately be accepted and adopted by that population. Change management and team alignment work the same way!

Before we get too far ahead though, it's worthwhile to define some of the key terms we'll be using throughout this article to ensure we stay on the same page:

The individual becomes aware of the innovation’s existence and starts to understand how it works. For example, a project manager may learn about a new strategic plan for her department through a team meeting with the department head.

The individual develops an attitude towards an innovation. Through a discussion with the department head, the project manager learns that the new strategy will require her to acquire additional skills in order to succeed, however the departmental head assures her training will be provided. The project manager grows excited about the opportunity to develop new skills and views the new strategy positively.

An individual who is aware of an innovation and has formed an attitude towards it will at some point decide whether to adopt the innovation. This often involves a trial phase by the individual herself or by a peer. After the discussion with her boss, the project manager decides to sit down with her team and start scoping out the project requirements in order to achieve KPIs laid out in the new strategy.

The individual starts using the innovation. She continues learning about it and overcomes problems, further reducing the innovation’s uncertainty. The project manager is now deep into the project that is working towards KPIs and business objectives of the new strategy. She catches up with other team leaders and learns about how their completion of project KPIs has helped the business grow. She becomes more confident in the strategy and the project her team is working on.

After having implemented an innovation, an adopter will continue to collect information that reinforces her decision. If this leads to conflicting information, the adoption may be reversed. The project manager will constantly monitor herself and her peers to reinforce or refute whether adopting the new strategy actually does improve business growth.

Using Diffusion of Innovations theory to influence the adoption of strategy

In order for strategy to succeed, gaining buy-in and adoption from your team is crucial. Without buy-in, behaviors don’t change, and the new strategy is left to collect dust on the shelf while most return to business as usual. So, how can we positively influence the adoption rate and overall success of strategy implementation?

It seems appropriate to look at this issue within the framework of the Diffusion of Innovations theory - especially considering the theory has already been successfully used to promote the adoption of innovations in fields including communication, social work, and marketing. Although the model may be incorrect in some regard (all models of reality are wrong in some respect), it provides us with some insight into why people behave a certain way, and gives us clues as how best to influence and change that behavior.

Let's get some things clear before we start digging into it. The theory explains how over time an innovation (an idea or product) gains momentum and diffuses through a specific population. Now, applying the theory to the field of strategy management we can interpret the theory as a way to explain how over time a new strategy gains momentum and diffuses through an organization.

In his theory, Rogers' identifies 5 sub-groups of people an innovation incrementally passes through in a specific population, and 5 main factors that influence the momentum of adoption of a new innovation.

The 5 subgroups of people include: 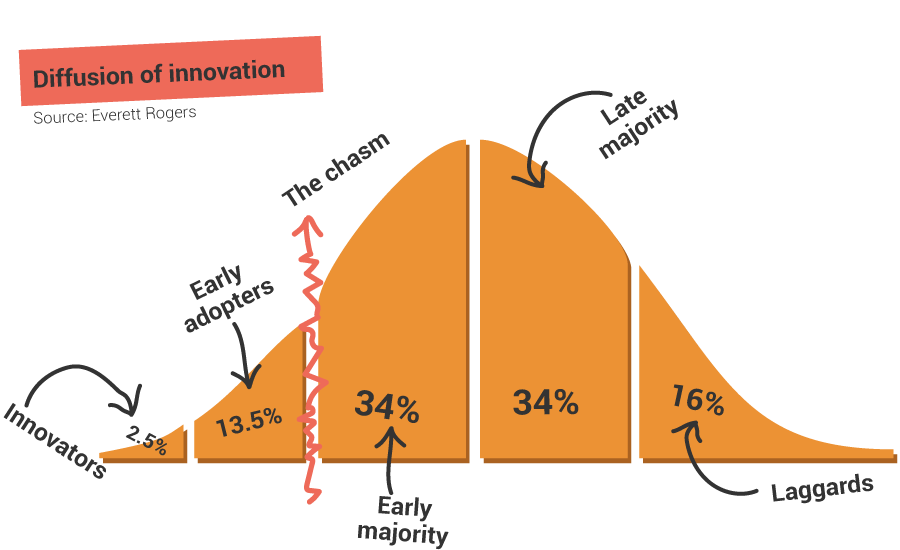 The 5 factors that influence the momentum of adoptions include:

Overall, this leaves us with 10 variables we're able to influence to improve the rate and overall success of adoption for a new strategy. Let's now take a look what each of these variables are, and how we can impact each to improve adoption rates and success of strategy implementation.

As mentioned above, the Diffusion of Innovations theory identifies 5 groups of people within a specific population that an innovation incrementally passes through on the road to adoption.

Innovators are the people who are always on the latest trend and generally make up around 2.5% of a specific population. They enjoy and pride themselves on discovering and being the first to try a new innovation. Innovators are willing to take risks, and little needs to be done to encourage this group to take up a new innovation.

The Innovators in your team will embrace and adopt a new strategy quickly and with little effort. Clearly communicating your new strategy is usually enough to convince these people to get on board. 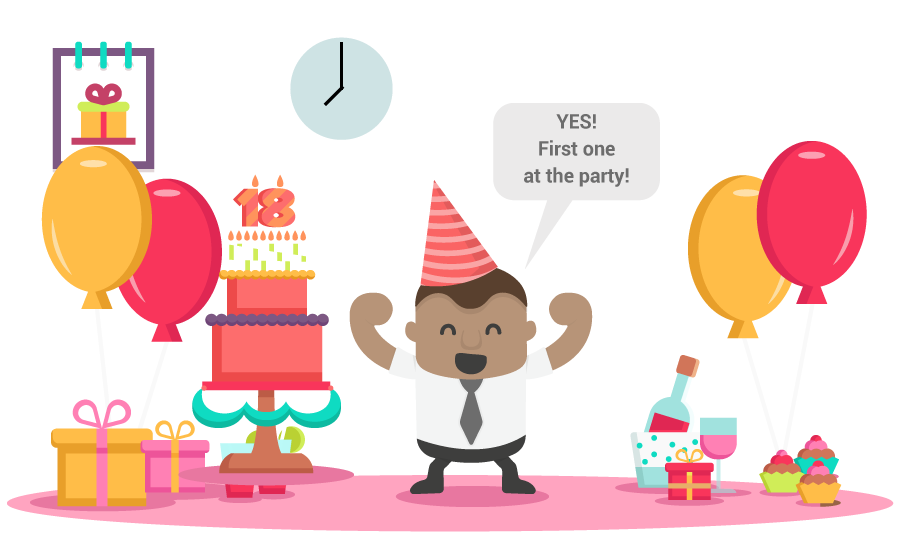 Early adopters generally hold some sort of leadership status, and show direction to their peers, while also valuing opportunities for change. On average, the group will generally make up around 13% of a target population. As they already value change opportunities, they don't require much convincing to modify behaviors and trying something new.

Early adopters, again, will require little effort to convince towards a quick adoption. To increase the rate of adoption in this group, how-to manuals and implementation guides provide useful resources. 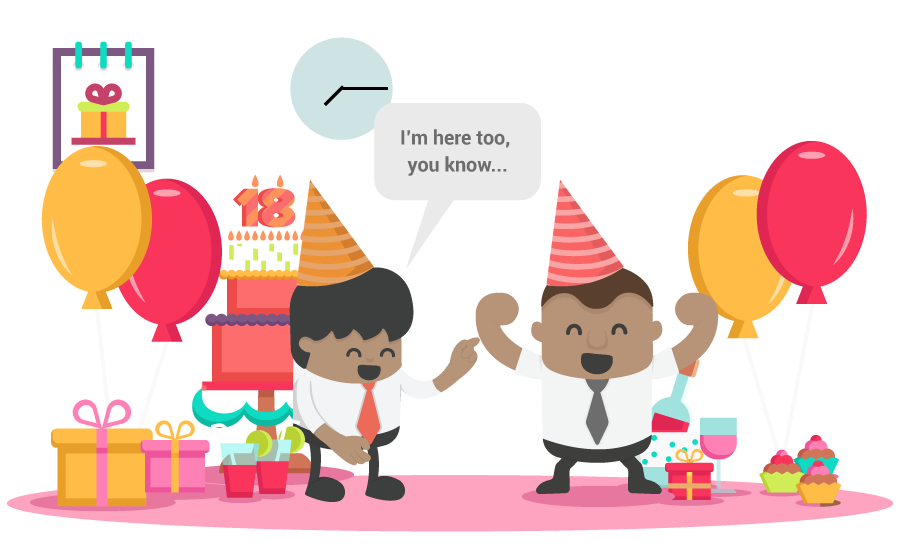 The sub-group that comprise the 'Early Majority' tend to make up a large section of the population at around 34%. They adopt new ideas faster than the average population, although, they're by no means influencers. Influencing this sub-group to speed up the rate of adoption of an innovation can be done by providing success stories and verified evidence. Case studies and measurable results can be solid ways forward to move this group from skepticism to adoption. 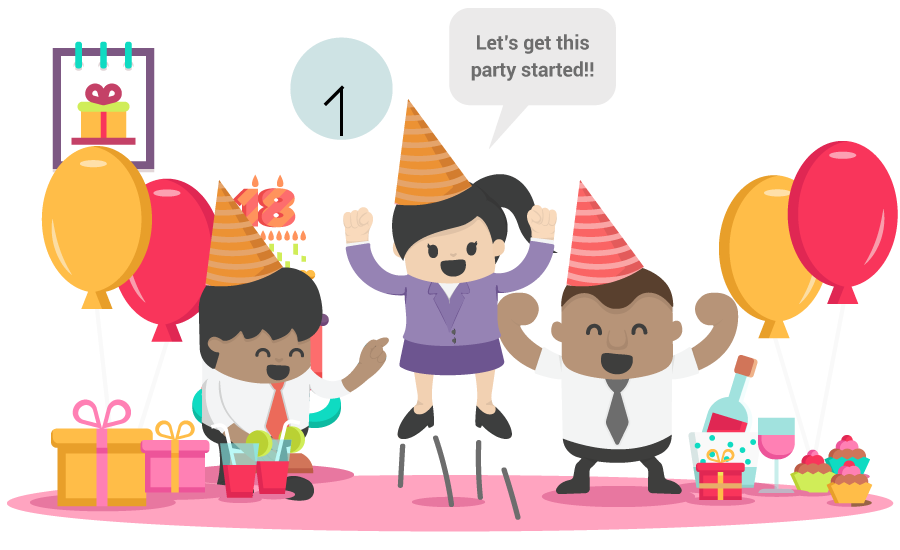 The Late Majority sub-group form the other larger section of the population, also sitting at around 34%. The late majority are the people who take a little more convincing when it comes to innovation adoption. They generally want to see proof of success from a majority before adoption from their own side and won't adopt until the innovation is pretty well recognized and accepted.

In order to influence this group, social proof from peers is your best option. Reviews from others or setting up forums for peers to chat can also be extremely useful. 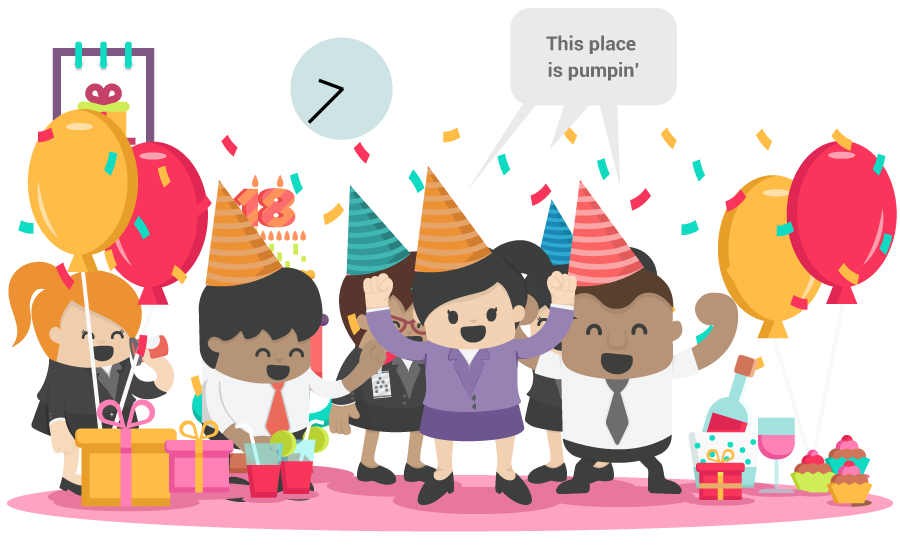 As the name insinuates, Laggards are the sub-group that lag behind the rest. The last 16% of a population are quite conservative and resistant to change. This is the group that is last to adopt a new strategy and require the largest effort when it comes to convincing them towards adoption of a new innovation.

Laggards, as mentioned above, are the hardest group to get on board. However, there are ways to influence this group to speed up their adoption of a new strategy. Laggards respond well to statistics, fear appeals and pressure from people in the other adopter groups. 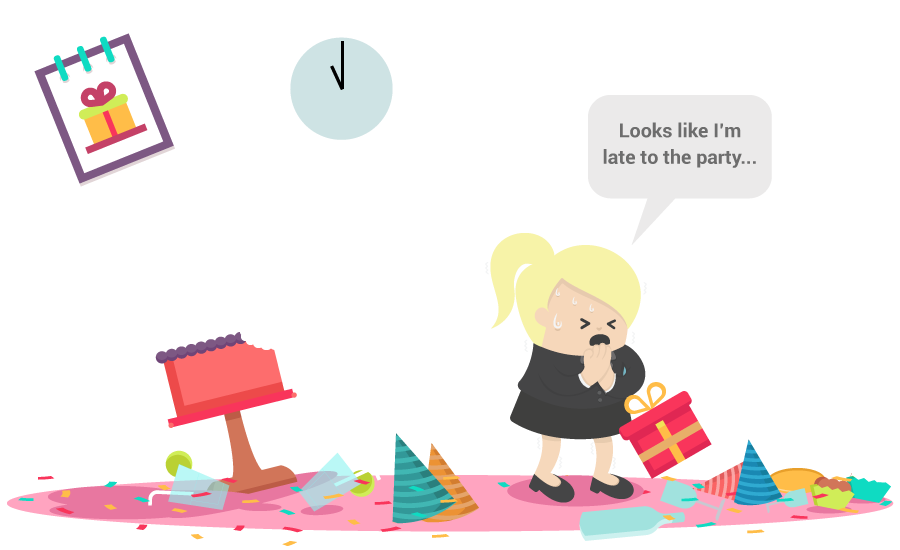 By identifying and categorizing those in your team or organization by the following groups, you'll gain an understanding of which people you’ll need to target with specific information to drive them along in the adoption of your strategy.

Let's now take a look at the actual factors of an innovation that influence it's adoption rate and overall success.

Your team's perception of the following factors in relation to your new strategy are what will determine whether your strategy implementation is successful and if so, how quickly it will become adopted by the 5 groups mentioned earlier.

Complexity of an innovation refers to the target population's perceived degree of difficulty in understanding the new innovation. Complexity has a negative relationship with innovation adoption rates: if perceived complexity is high, the speed of adoption declines.

A new strategy may have a high degree of perceived complexity to employees of an organization if the strategy is poorly structured and communicated. The employees struggle to understand who owns different components of the plan and what their areas of responsibility are. As the new behaviors required are unclear, employees rate of adoption for the new strategy are slow.

Increasing the success of strategy adoption and its adoption rate amongst your team requires the perception of its complexity to be very minimal. Strategy by nature is complex, which makes this factor a bigger barrier than some of the others. However, it's worth remembering that it's not the complexity that is the issue, it's your team's perception of complexity. Which leaves us with some wiggle room to positively influence this factor:

It's difficult to get a new strategy to fit well in this respect, as there is little opportunity to 'test run' a new strategy in order to judge its effectiveness prior to adoption.

A new strategy can have tangible results for an organization depending on the objectives of the strategy. If increased profit is one of the objectives, this is a tangible result that people are able to view, and easily understand the value. Let's say you also had an objective in the strategy that is to improve the brand sentiment: the results for this objective are a little less tangible and can be difficult for people to observe, which may end up making them skeptical of the innovation's effectiveness.