This article explains how to make goals private in Cascade, and the implications of doing so.

Written by Brandon Bett
Updated over a week ago

Cascade exists for the purpose of making an organization’s strategy more visible to everyone. Despite being transparent by default, we understand that some goals may need to be hidden from other users for a variety of reasons. 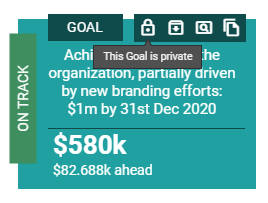 To be able to mark goals as private, go to Admin > System > Settings and turn on the "Allow private Goals" setting. Note that you need System Privileges to access this screen:

With this setting turned on, any user can mark any goals they own/co-own as "Restricted" (private). The "Restrict Visibility" checkbox can be found in the Define Details section when building a goal...

...and can be toggled between "Yes" and "No" for goals that have already been built:

If you only want certain types of goals to be able to be marked private/restricted, such as KPIs, you can remove the "Restrict Visibility" checkbox from those Goal Templates (see here for more). This checkbox is technically one of many Custom Fields that can be added/removed from Templates.

Who can see Private Goals?

Some Roles and privileges still let people see goals in reports, searches, dashboards, etc. even when they are marked as private.

I’m Florence Leclaire and I have a private Goal which has Ping Simo’s Goal as a parent. The goal is private because it's performance related and deals with sensitive information. The Goal is highlighted in orange below, and can be seen/searched by: